👉
The Lorem Ipsum also consists of long-form articles about 1-2 times a week. You can turn those into emails with a simple toggle button here.

While I am satisfied with my role as Email Writer and Marketing Doer, I am thinking about adding Special Master to my repertoire as well. Maybe a side hustle.

Specials Master (pluralized in the manner of "Secretaries of State" or "Eggs Benedict") are hired to basically just "go through things". So you copy & paste a thing, delete this, burn that. Sounds easy, right?

So, the qualifications are as follows :

What do you need a Special Master to do? Let me know in the comments.

Now, let's go through The News.

If it looks like Ukraine is grinning right now, it's because they managed to take a bunch of ground back from Russian occupiers, accounting for as much as 6,000 square kilometers. Ukraine, with a few tricks up its sleeve, showed up in some of the northeastern towns by surprise, and successfully ran off scores of Russian soldiers, who were in such a hurry to flee they left their tanks and other war equipment behind (not sure if they remembered to leave the keys).

Putin, receiving criticism from popular Russian bloggers, jumped over to see Chinese President Xi Jinping, but couldn't quite land his support either, as Xi had "questions and concerns" about the Ukraine invasion. Since then, even the Pope said it was totally a good idea to give weapons to Ukraine to fight Russia, so even God doesn't like Vladimir.

The good news is that since most Russian media is controlled by Putin himself, he is still a winner in their book, even if that's the only thing he wins. (more)

Senator Lindsey Graham unveiled a little snack for the midterms to attract some voting energy by proposing federal legislation to ban abortions after 15 weeks of pregnancy. Graham paid several women to stand behind him when he announced the plan but didn't let them speak for obvious reasons. After the announcement, the rest of the Republican Party took the morning-after pill because they evidently did not consent to his plan to reflect the Party. (more)

At least 60 subpoenas and the MyPillow guy's cell phone have been confiscated. Mr. Pillow, whose actual last name is Lindell, was in a drive-through at a fast food restaurant (surprisingly a Hardees) when he was surrounded by federal agents and forced to hand over his phone. While they were exercising a search warrant related to possible fraud related to Trump's stolen election claims, the feds also discovered countless pictures of naked pillows. (more)

Inflation is so bad that even inflation itself is inflating. I was going to make a joke about how inflation would have been 7.61% if it were not for inflation -- but suffice it to say that 8.3% is not that great and people don't like math jokes. Especially in this economy. The stock market didn't like that joke either, and in response, it took a dump – the largest since 2020. Not everything stinks though. Unemployment is low and job growth is still in a good place. Here's more about the economy. (more)

President Biden has made it a national purpose to fight cancer. It's called a "Cancer Moonshot" which is a play on words referring to Kennedy's  "Moonshot" a national purpose of going to the moon, and also to "Moonpies" because they supposedly contain ingredients that cause cancer.  (more)

That's it for the news. Now here's The Gist.

Should we take more action than we already are in the Russian war in Ukraine?

I rarely if ever write blogs about assassination, and this isn't one either, I promise. But let's say hypothetically we classified Putin as a terrorist like we did Osama Bin Laden (who happened to kill far fewer civilians on foreign soil).

I don't know who gets the honors, but it could be a great resume builder for an aspiring ex-military professional turned solo mercenary. A Jack Baur type perhaps looking for a special military operation to take on. What I'm asking is, should we follow the advice of 'The Bobs' and "fix the glitch"? I'll go into detail in this week's long form.

I also take a moment to remember when I was in New York City, on September 11th.

That's it for this week, except for this one very important question:

Have a great weekend!

Please use a screen protector and wipe down all your emails before opening them, but the pandemic is over.

The ways The Algorithm takes away our Sundays and decides our fate. An essay about how sound bites win over sound thinking, and even shapes our beliefs. 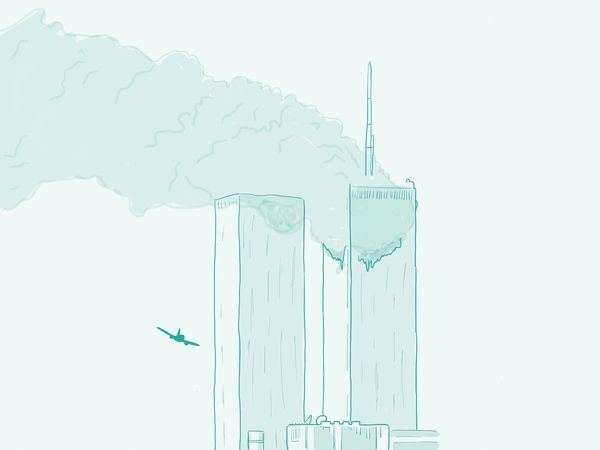 Lessons from 9/11: It’s cheaper to clean up a political mess than a nuclear disaster. Should we stop the bleeding before it gets worse?